IMF data on the world economy: what a difference a data version makes

Data sources are regularly updated. Users typically assume that this means that new, more recent data are added and that errors are corrected. Newer data are better. But are they?  And what are the implications for replication? This guest blog of the replication network points out challenges and potential benefits of the existence of different data versions.

Variations between the different vintages of a data set are not necessarily problematic. Variations provide insight in the measurement error in the data source. A better understanding of measurement error may be helpful for establishing why a replication fails or succeeds. Moreover, performing replications over many different vintages can support the robustness of the original study’s findings. If all the data versions arrive at the same conclusion, this strengthens confidence in the replication’s verdict on the original study (be it positive or negative). It is not the difference of the data version that matters, but the similarity of findings across different data versions. As a result, different data versions can be turned into an important asset for replication research.
Posted by peter van bergeijk at 5:32 PM 1 comment:

Toward a New Chapter in Macroeconomics – Literally by Robert Scott Gassler

Summary
Intermediate macroeconomics textbooks (Blanchard, 2003, for example) have started to expand their treatment of growth and integrate it a bit more into the model, if only by putting the chapter in the middle and not at the end. Jones and Burda and Wyploz even write their books backwards from what it would have been in the 1960s: economic growth, then Aggregate-Supply-Aggregate-Demand, then the Keynesian model, then monetary theory, then the ISLM model, and so forth. The economy is, however, embedded in the ecological system, so our models of the economy need to be embedded in models of the ecological system as well. Before the chapter on economic growth, there needs to be one on the environment in which economic activity takes place. The limits to growth, both from depleting resources and from carbon emissions, should be addressed early. To the circular flow, for example, there need to be added a source and a sink; the flow comes from somewhere and goes to somewhere. I attempt to outline such a chapter. I define a variable YG, which depends not only on the usual factors of production but especially on the quantity of depletable resources used and is related to the quantity of emissions in the environment from the past. There is a level YG* beyond which the environment of the planet is irreversibly damaged. Note that Mother Nature does not care about prices or reductions in per capita GDP. I also indicate how this chapter affects the rest of a typical macroeconomics textbook. Jonathan Harris’s classification of consumption and other variables into non-durable, human-capital intensive, energy-intensive, etc., would appear in this chapter and in the ones on measurement and the components of aggregate demand. But for the moment it should be enough to put them in this new chapter. That way it can be slipped into the typical macroeconomics course without requiring very much revision of the instructor’s lecture notes. This chapter should be compatible with whatever approach is used in the textbook: New Classical, New Keynesian, Post-Keynesian, or radical, though perhaps with a few revisions here and there. For example, a New Classical model would have a vertical Aggregate Supply curve, a New Keynesian model would use a partly horizontal one, and a radical textbook would omit the part on Aggregate Supply and Aggregate Demand. Ideally we would rewrite macroeconomics textbooks completely. In the meantime, we can at least supplement them in a useful way
Posted by peter van bergeijk at 10:54 PM 3 comments:

"How Large are Global Energy Subsidies?"


This paper estimates fossil fuel subsidies and the economic and environmental benefits from reforming them, focusing mostly on a broad notion of subsidies arising when consumer prices are below supply costs plus environmental costs and general consumption taxes. Subsidies are $4.9 trillion worldwide in 2013 and $5.3 trillion in 2015 (6.5 percent of global GDP in both years). Undercharging for global warming accounts for 22 percent of the subsidy in 2013, air pollution 46 percent, broader vehicle externalities 13 percent, supply costs 11 percent, and general consumer taxes 8 percent. China was the biggest subsidizer in 2013 ($1.8 trillion), followed by the United States ($0.6 trillion), and Russia, the European Union, and India (each with about $0.3 trillion). Eliminating subsidies would have reduced carbon emissions in 2013 by 21 percent and fossil fuel air pollution deaths 55 percent, while raising revenue of 4 percent, and social welfare by 2.2 percent, of global GDP.
Posted by peter van bergeijk at 10:54 AM 1 comment: 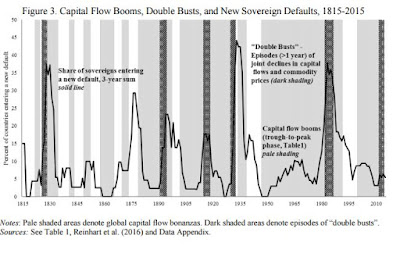 
Capital flow and commodity cycles have long been connected with economic crises. Sparse historical data, however, has made it difficult to connect their timing. We date turning points in global capital flows and commodity prices across two centuries and provide estimates from alternative data sources. We then document a strong overlap between the ebb and flow of financial capital, the commodity price super-cycle, and sovereign defaults since 1815. The results have implications for today, as many emerging markets are facing a double bust in capital inflows and commodity prices, making them vulnerable to crises.
Posted by peter van bergeijk at 8:30 AM 1 comment: 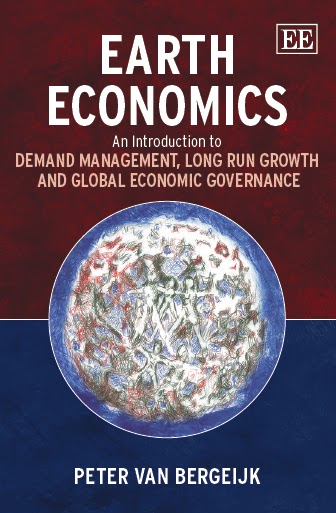